Read about my first trimester here and why we’re choosing a home birth here!

Most people talk about how quickly pregnancy flies by. “Oh, I can’t believe we’re heading into the third trimester!” But for me, the most impatient person in the world, this is crawling by. I know I should be savoring this, but I am so ready to meet our little girl!

Feeling // Thankfully, the second trimester has been physically uneventful. My morning sickness bit the dust around 13 weeks. I did start getting migraines every few days, but seeing a chiropractor knocked those out in a few weeks. I did have more energy (although not the “surge” of energy they talk about!), and have loved seeing my belly grow! However, I also started having some killer SI joint pain (low back) around 16 weeks, and it’s still going strong. Sometimes it’s immobilizing, and makes it hard to be as active as I would have wished. And pubic bone pain has made a terrible bedfellow (who knew pubic bone pain was a thing?!). 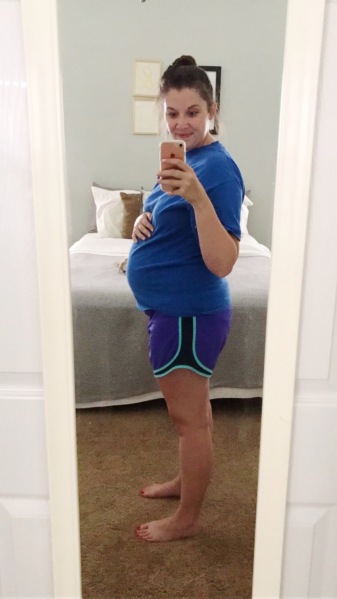 I finally felt sweet babe kicking right at 20 weeks. It feels like a heart palpitation in your belly, or like big, underwater bubbles. Now that she’s bigger and stronger, they’re definitely more defined punches and kicks! Matt was able to feel her around 24 weeks, and he loves it—although sometimes I think Little Bird thinks she’s playing hide and seek with her daddy and will immediately stop kicking once his hand is on my belly!

Emotionally, the second trimester was pretty rough. For reasons that I probably won’t be sharing, we had a time where we thought we weren’t going to be able to deliver at home, and would be forced into seeing an OB and delivering at a hospital. To most that’s nbd, but to us it was devastating news. We still have some road bumps to cover before we’ll know 100% that we’re able to deliver at home, but we’re at about 90% now, which is reassuring. Obviously we’re being prayerful about this, and I’d love prayers for a continued ability to give this whole thing up to the Lord. We could still have a home birth, but something happen where we have to transfer to a hospital during labor, and I need to be emotionally prepared for that. Letting go of the control part of birth has been really, really hard for me, but I’m thankful that we worship a God who I love and trust and who will use all things for His glory.

Appointments // Weekly chiropractor appointments (with a Webster technique certified chiro), biweekly acupuncture appointments, and appointments with our midwives every four weeks. We did the gestational diabetes test (passed!), and the 28-week labs and everything came back great. I will have an injection of Rhogam at 28 weeks since my blood type is O-, meaning I am Rh-negative (Google it).

Bodywork // In addition to the Webster technique and regular adjustments by my chiropractor, I’m trying to do the following things as often as possible (goal: daily; actual: weekly) to help my pelvis stay balanced and my ligaments and cervix stay open and not twisted with the goal of helping baby girl get head down and in the anterior position:
+ Walking
+ Psoas Release (Activity #5 on Spinning Babies)
+ Pelvic tilts (AKA cat/cow with the focus on the cat)
+ Child’s pose
+ Deep squats (heels on the floor)
+ Sitting less on the couch and more sitting on the ball or in a “tailor sit” on the ground

Other thoughts on the second trimester // This might be unpopular, but it’s something that has been on my mind. When we have shared our home birth hiccup, and that we’re worried about being forced to deliver at a hospital, soooooo many people have said “well the only thing that matters is a healthy baby!” And man, that’s just not the right thing to say (even though I know they mean well).

Sure, a healthy baby is of utmost importance. That’s a duh, you know? No one gets pregnant and is like, “I don’t really care if the baby is healthy!” So it’s a given. But that’s not the only thing that is important, and it’s this kind of language that tends to invalidate suffering and complicate mourning. I, as a mother and a woman and a human being, have every right to have desires and wishes and needs that surround my birth experience. I have certain things that may even be traumatizing to me if they do/don’t happen. So when those wants/needs aren’t met, it can lead to suffering on my part, which then requires mourning if I want to be able to move on in a healthy way. But when everyone tells you that the only thing that matters is a healthy baby, you start to think that there’s something wrong with you, and that you should just “get over” the loss of these hopes and dreams that you had taken away from you.

Obviously I don’t think you should risk the health of your baby for these wants/needs. That’s part of the sacrifice a mother makes. But that’s not the situation I’m talking about here. I really just wish people could learn to sit with another’s pain and say, “Man, that really just sucks. I’m hurting for you and I wish I could change it.” Having those types of conversation helps a person to grieve appropriately and validates their pain. So let’s learn how to sit with that and want a healthy baby.